Canada’s chief librarian Leslie Weir in her first act in office last September 7 accepted a Communist Party-paid junket as guest of the National Library of China in a celebration of “socialist culture,” according to records. The Beijing conference was held only weeks before Party librarians admitted to book burning.

Weir did not reply to an interview request, and Library and Archives Canada did not comment. The former University of Ottawa librarian was named to the $243,000-a year post by cabinet last August 30.

Records indicate a week later Weir billed $983 in expenses to fly to Beijing as guest of China’s National Library in celebration of the seventieth anniversary of the Communist takeover of the mainland. Thousands in additional expenses were paid by her hosts. “Accommodation costs, meals and a portion of the air fare cost were paid by the National Library of China,” according to filings.

Weir’s visit to the two-day conference came nine months after Beijing police jailed two Canadian consultants, Michael Kovrig and Michael Spavor. A total 123 Canadians were in Chinese prisons at the time, according to the Department of Foreign Affairs.

Weir did not disclose a text of her speech to the conference of the International Symposium of Libraries. Only nine other countries sent delegates, according to minutes of the meeting.

The conference opened with remarks by China’s Minister of Culture who said he “hoped the National Library of China and public libraries around the country would stick to the Communist Party Central Committee’s decisions and plans…and make greater contributions to the great development and prosperity of socialist culture,” according to minutes. 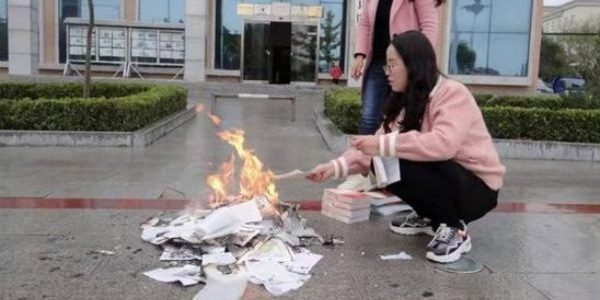 The official Red Star News on December 6 reported the book burning complete with photo. The stories were later deleted by Party censors but confirmed December 9 by the South China Morning Post, a Hong Kong daily.

China’s Ministry of Education in an August 7 decree only weeks before the library convention issued new textbooks on “moral education.” “As a big improvement on previous versions, the textbooks have fully incorporated socialist traditions and values, traditional Chinese cultural expressions and China’s revolutionary history,” the ministry said in a statement.