An anonymous Twitter user so profane he was blocked by MPs is a federal employee. The Public Sector Values And Ethics Code prohibits staff from outside activities that “cast doubt on your ability to perform your duties in a completely objective manner”.

“I’m dealing with someone that I don’t even know really exists; that’s my concern,” said New Democrat MP Charlie Angus (Timmins-James Bay, Ont.), who blocked the Twitter account. “You’re going to make ignorant, ugly statements and you’re hiding your name? How is that part of political discourse?”

“I think Twitter has just become such a negative force,” said Angus. “I think if we know who people are, well, they might think twice and you have a more robust discussion, as opposed to a toxic discussion.”

Using the pseudonym Neil Before Zod – “It sounds better than Neil from the corner cubicle in accounting,” he wrote – the staffer posted 20 to 40 messages daily including vulgar attacks on MPs and senators. Zod last night acknowledged his real name, Neil Waytowich of Peterborough, Ont., after Blacklock’s confirmed his identity.

Waytowich declined multiple interview requests and refused to name his federal employer, claiming he had abruptly resigned from the public service. “Phoenix means we aren’t being paid at all,” he wrote in a previous tweet, referring to the Phoenix Pay System for federal employees. “But please, pile on, you typical civil servant-flogging conservative shill.”

“Trolling is a Twitter fact of life anonymous or not,” Waytowich wrote in one entry. “As someone who is both politically outspoken and a civil servant, it is the only way I can be this active on Twitter without censoring myself.”

“He is one of the most negative, nasty voices on Twitter which is making the social media platform hard for average Canadians to access news from,” said Conservative MP Erin O’Toole (Durham, Ont.). “He tries to dominate and intimidate.”

“I’m a big supporter of free speech, but if you’re a government employee and you are anonymizing it and you’re becoming really one of the harassing voices on social media, should you be doing that on the public dime?” said O’Toole. “Should you not have to adhere to basic rules? That is a discussion we should have.”

The 2012 Ethics Code for federal employees requires that staff “serve the public interest at all times with integrity and in a manner that will bear the closest public scrutiny”. The Code also prohibits unauthorized political activism “defined as ‘any activity in support of, within or in opposition to a political party’.”

“Some of us have employment that could be adversely affected by Twitter activism,” read one Zod tweet: “I am a lifelong Liberal. I lean left, and belong to a public service union.”

“We’ve blocked him because there was a very, very sharp partisan nature to his posts, very nasty and unfair and frankly even personal at times,” said New Democrat MP Don Davies (Vancouver Kingsway). “That just crosses the line on fair comment.”

“I’ve got a lot of tolerance for a wide variety of opinions and people should be free to say what they want, but overtly Liberal partisan trolls that are spreading disinformation and engaging in really low and underhanded attacks I don’t think should be tolerated,” said Davies. “This is exactly what Canadians don’t like about social media.”

One Zod tweet solicited campaign contributions for Vancouver Kingsway Liberal candidate Tamara Taggart, a former TV announcer. “Here is how to get into contact with Tamara’s campaign, to help and to donate,” he wrote. “We need more like Tamara Taggart in politics.” In another tweet, Zod described Prime Minister Justin Trudeau as “amazing, so very proud”. Candidate Taggart didn’t respond to an interview request.

“We expect more from our public servants,” said MP Davies. “I think quite honestly what he’s doing is a clear breach of the Ethics Code.”

“Under that Code civil servants have to maintain a neutrality that explicitly is not only in their public but also their private affairs,” said Davies. “It says ‘at all times’ they must maintain that, because Canadians must have confidence that our civil service is professional and neutral.” 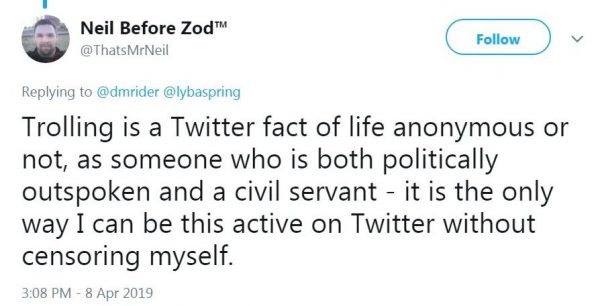 “When you have a public servant like this who is sticking his nose so deeply into partisan politics – I mean, doing a podcast interview with my Liberal opponent and trying to raise money in this fawning promotion of a Liberal candidate in my riding while he’s a federal civil servant? That doesn’t give me any confidence that if we’re government, somebody like this will carry out their duties in a nonpartisan way,” said Davies.

The federal Code states: “Integrity is the cornerstone.”